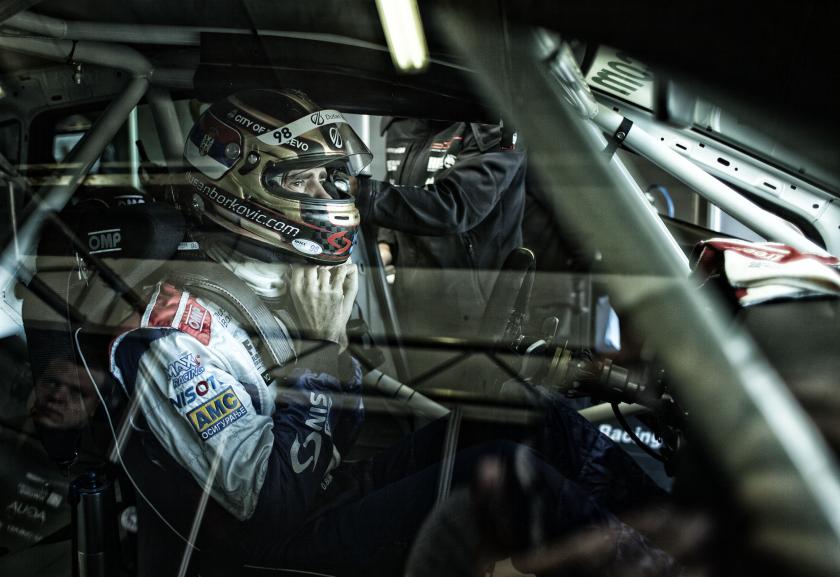 Dušan Borković’s career started when he was nearly 10 years old, in kart racing. The first race he drove was held on customs terminal, at the entrance to Belgrade. Although many hoped for him to be in the first 15, he finished the race fourth. It was an unbelievable success for a beginner.

He ended up at his next race on the second place, driving much faster than the others, established and experienced competitors. However, during a practice before the third race, his karting flipped over, and he suffered several injuries – of which the worst was fracturing both forearms. The recovery lasted for several months, but the moment they took the cast off of one arm, he was behind the wheel again. After he fully recovered, his rise started again.

It was a truly successful kart racing season, in which Dušan became a state champion. He repeated that success six years in a row. 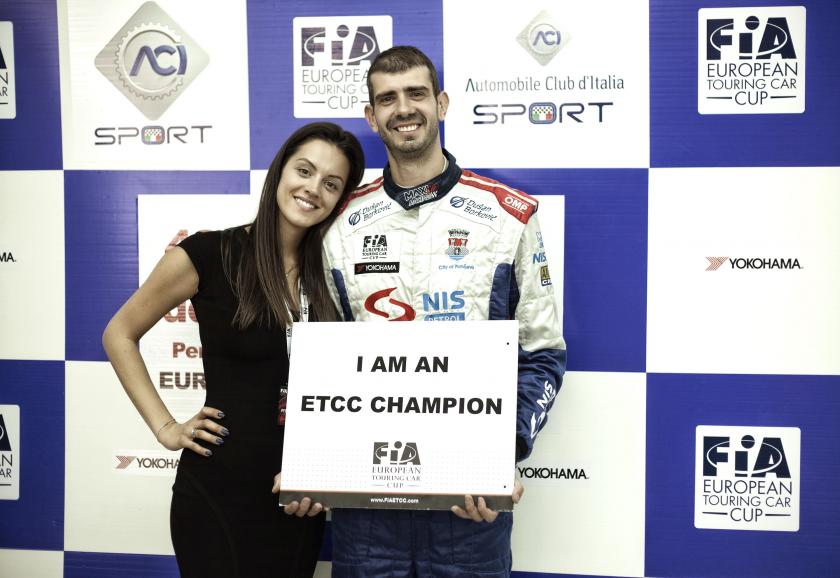 There were indications of a promising career even when Dušan was just a little boy. He used to spend a lot of time with his father Jovan, a double champion of Yugoslavia in the motorcycle and truck races in the seventies and nineties of the last century.

As a baby I couldn’t fall asleep in my bed like all other children. I preferred to be driven in the car. It was probably then when the smell of gasoline got into my blood stream and determined my future. A champion was driving a future champion! When I was one year old boy, my dad drove me to the mountain top at Divčibare, “placed” me on the top of the hood and asked: “What do you want to be when you grow up?”. I humbly answered “a pion”, which in the language of a one year old means – a champion.

This and the following year Dušan becane vice champion in Hungarian karting championship. 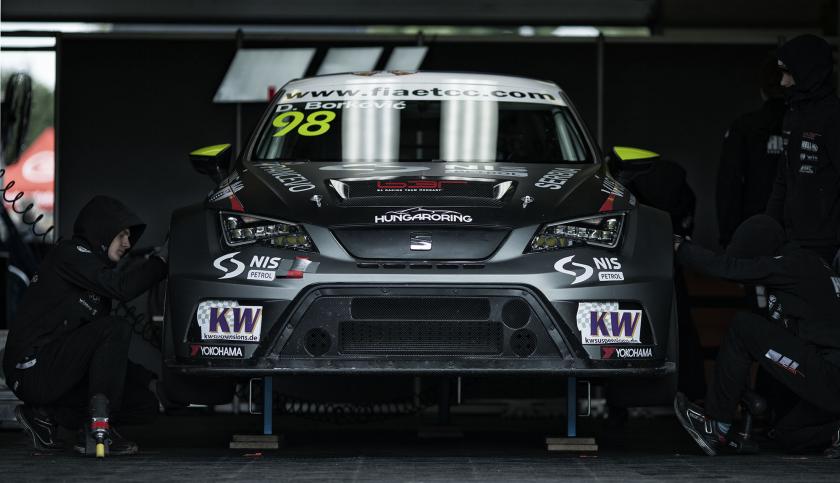 He was close to loosing his right arm when it got under the wheel at the end of the race in Hungary. Nevertheless he managed to recover and continue his professional career. It was a year in which Borković won his fifth consecutive championship title, and started to dream about his second Golden Helmet.

A dream came true. After the sixth consecutive championship title, Dušan was awarded with his second Golden Helmet, thus becoming the youngest  driver who won this award twice.

Dušan switched over to “small N” competition where “Yugo” was driven.

He already became a runner up of “small N” competition, with the first victory at the famous street track “Ušće” in Belgrade.

Borković switched to the most popular competition in Serbian Championship – “National Class-Hybrid”. Since he didn’t participate in all the races, he ended up third in overall rankings. 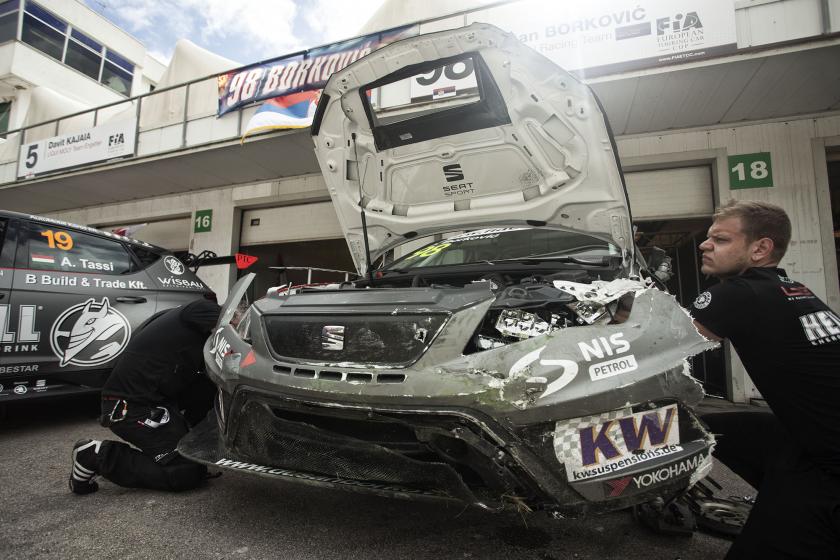 Dušan still drives in “National Class” competition, and he ends the season as a runner-up. The next four years, from 2004 to 2008, he had the most wins in the history of “National Class”.

Dušan wins the third “Golden Helmet” (this time in Hybrid class), and accordingly his first “Diamond Helmet”. Thus he became the youngest driver ever to win the most prestigious award in history of car racing. Dušan Borković is one of the three Serbian drivers who won such a prize. Also, in 2007 he drove Hill Climb races for the first time, and had track records on all of the eight tracks.

In 2008, Dušan drove everything he could, including Hill Climb, circuit and rally races.

Dušan Borković became the Hill Climb Champion of Serbia with his Mitsubishi Lancer Evo 9. There were 70 drivers in the championship, but he won all five races. The car that opened European doors for him was a present from Dragoljub Lekić, general manager of „Vitro Group“. He also participated in Serbia and Istra Rallies. 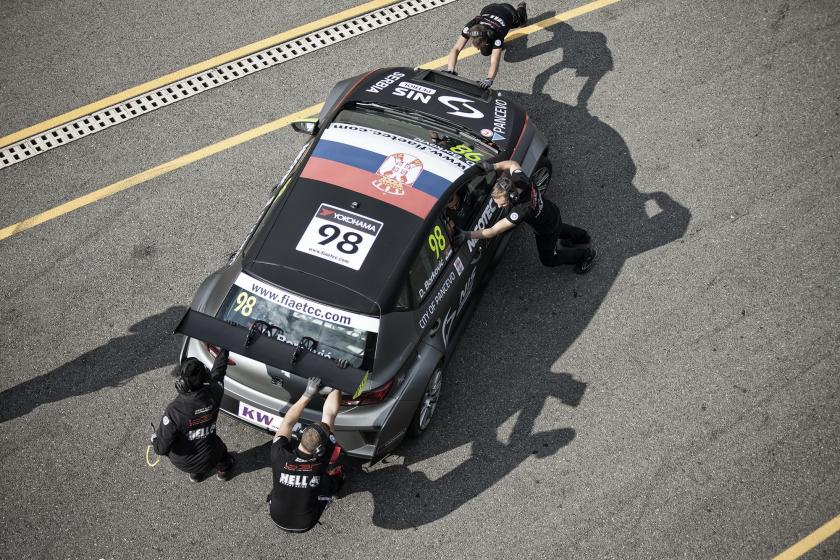 This was a very important season for Dušan’s career, since he became European champion in Hill Climb races (FIA European Hill Climb Championship). He won the race and set the track record in eight out of ten races that he drove. In the race in Switzerland it was clear that nobody can get ahead of him. He celebrated the title 2 races after Switzerland in Croatian Buzet, in front of 15.000 spectators.

Dušan had a great debut season in European Touring Car Cup (ETCC), where he took the third place in overall standings, in the strongest S2000 class. He competed in cooperation with Campos Racing Team, under the name NIS Petrol Racing Team. He achieved the best results in Salzburg where he won one race, driving SEAT Leon TFSI S2000. In the last two races of the season he drove Chevrolet Cruze S2000.

This experience means more to me than all the previous 18 years I spent in autosport. Everyone drives fast, without mistakes. You can tell they grew up on the right tracks, in great cars. Such a competition makes you give your best, and even do something impossible, just to keep up with the fastest drivers – Dušan Borković sums up the impressions after a debut season in ETCC.

Dušan Borković will be the first Serbian driver to compete in the most prestigious world circuit competition – World Touring Car Championship (WTCC). Dušan will drive for NIS Petrol Racing Team by Campos, with number 98.

“I will use this season to learn and gain new experiences. Hopefully, with good strategy, in two or three season I will be able to compete for the biggest prize. Driving alongside the greatest race car drivers such as Loeb, Muller, Tarquini, and others, is a great achievement for me, like a dream come true. I guess that in the first few races I will not be aware that I am among the best, competing along with them in the world championship“- says Dušan Borković before the next season in WTCC TC1 class.

Dusan Borkovic’s debut season in World Touring Car Championship was marked by him winning the second place on Suzuka circuit in Japan. Considering Dusan to be the only Serbian race car driver to ever competed in WTCC this is the biggest success in Serbian auto racing history.

On the first racing weekend in the season Dusan already showed his potential and how fast he is and surpassed all the expectations entering third round of qualifications and winning fifth place in race one in Morocco, but then started misfortunes with the car.

Dusan won 41 points in his debut season and was in 14th place in overall standings. Borkovic didn’t compete only in the races in Macau due to the injury sustained in Beijing.

His debut season will be remembered for two disqualifications in Hungary and Argentina. In both cases WTCC technical delegate estimated Dusan’s front splitter to be lower than regulation.

“In my first WTCC season my plan was to learn the circuits and gain experience. I dreamt to drive side by side with Sebastian Loeb and other racing giants and in Suzuka all of them exept Gabrielle Tarquini were behind me and I crossed the finish line second. I think my driving was good but it can be better. I am entering new season an optimist and a great desire for more podiums” 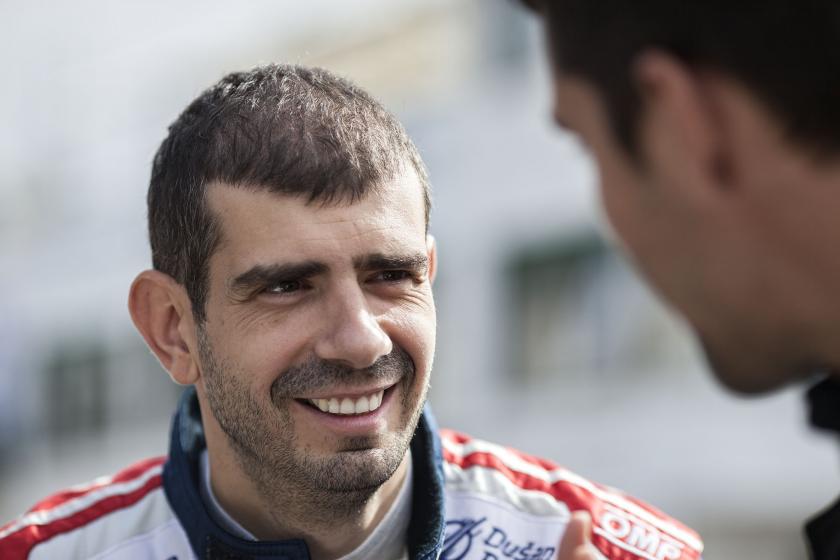 Other change from 2014 is the return of Yokohama Independents Trophy. It was the part of WTCC since 2006 till 2013 with additional scoring points. It wasn’t held previous year because of the new specification TC1 cars were introduced.

Dušan startet 2015 season in World Touring Car Championship but after two weekends in Argentina and Morocco Borković and his NIS Petrol Racing team made a decision not to continue in WTCC and to move to FIA European Touring Car Cup (ETCC) starting from the races in Hungaroring on 2 and 3 of May. This was the first round of ETCC 2015 season. Dušan made this decision because of the safety reasons, his sitting position was a problem from the start of the season and it was not fixed after two racing weekends. Borković will compete in 6 racing weekends in 2015 on the circuits in Hungary, Slovakia, France, Czech Republic, Belgium and Italy.

During the first racing weekend in Hungary Borkovic already showed that he will be a contender for ETCC title. During first 5 racing weekends Borkovic had 5 wins and was in a lead in overall standings the whole time. On the last weekend in Pergusa Dusan had an accident during the first race but with his team's hard work and dedication he was able to start the second race and finish forth in his class, win 10 new points and a champions title.

Dusan’s hometown city of Pancevo organised a welcome celebration for the champion.

By the end of 2015 Borkovic announced that he will be returning to the world level races in TCR international in 2016. Serbian champion will drive new Seat Leon with Hungarian B3 racing team. The same team he became European champion with.

TCR owner Marcello Lotti founded WTCC 11 years ago and left the championship in 2014 to launch a new innovative TCR international in 2015. This world championship also has 24 races on 12 racing weekends. 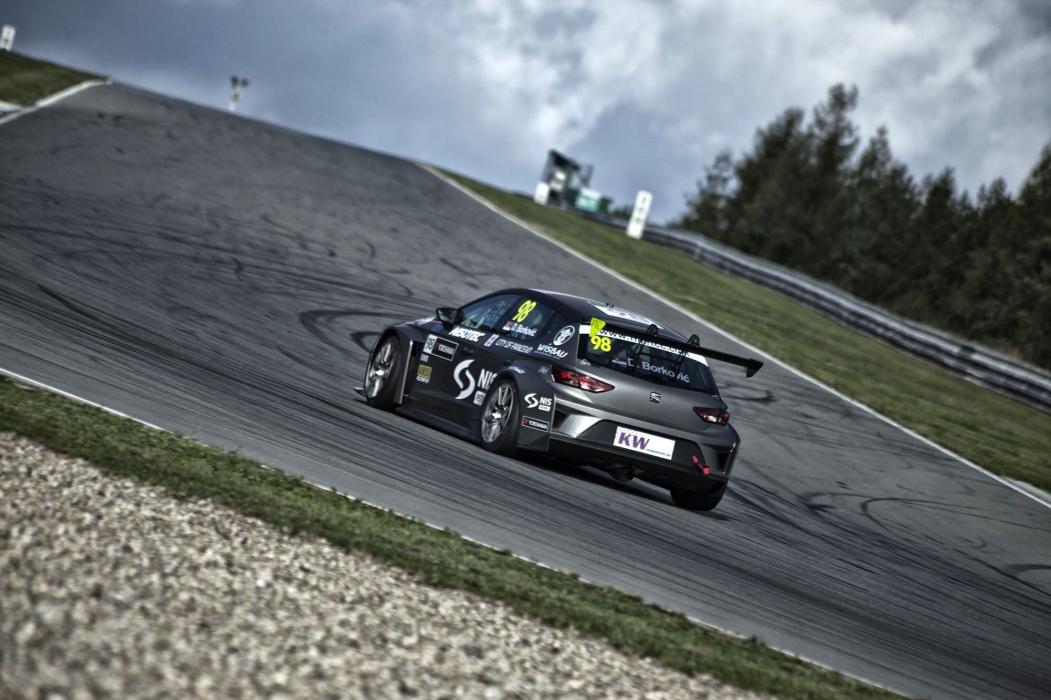 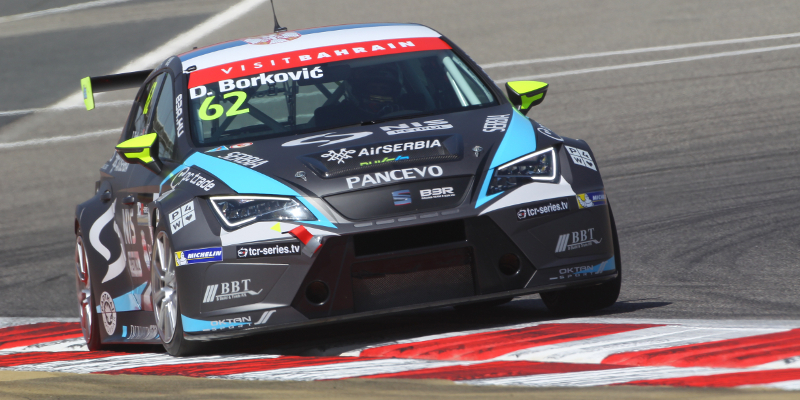